At the first two links below our Jabiru II prototype is shown in December 2011 tests in free flight under the aft safety tether at approximately 2.5 lbs. tension. A power supply transmits power through the tether to Jabiru II, enabling it to rise to altitude in horizontal flight. When the tow vehicle's ground speed causes enough "wind," the craft "noses" up into power generation attitude, stops drawing power from the supply and starts generating electricity, which is transmitted through the taut forward tether to the load bank. The Flying Electric Generator (FEG) continues generating electricity until the wind speed decreases to a level not supportive of generation. The FEG then returns to horizontal flight and resumes drawing from the power supply. The FEG prototype then lands on the trailer bed after the tow vehicle has stopped. (Note: These copyrighted videos play immediately when this website is viewed in Internet Explorer. Use of either Firefox or Google Chrome requires downloading the video files prior to viewing.)

The video at the link below shows our first FEG prototype “Jabiru” performing a programmed autonomous flight (without operator input) from takeoff to landing. The craft rises to 35 feet and hovers. It then executes a series of maneuvers, stopping to hover at corners, and then returning to hover above and land at the original launch point.

To view the video of the original flying electric generator choose among several files depending upon your internet connection speed and which video player your computer has. The video shows Robert�s twin 15 foot diameter rotor test model flying electric generator in both side and front views of the machine flying in the power generation mode in which the wind spins the rotor blades. This mode followed a powered-via-the-tether mode (not shown) where the rotors were mostly parallel to the ground. Then a transition to the autorotation mode took place (also not shown) followed by a further transition to the electrical power generation mode in the nose up position maintained in the video.

The following links are in the order of best quality first.

A simulated take off in a powered-via-the-tether mode is shown where the rotors are nearly parallel to the ground. Then the FEG is seen transitioning to the nose up position that it will maintain during the electrical power generation mode in which persistent winds provide the only power that spins the rotors. Each rotor is attached to a generator. Next, electrical power flow is illustrated as light traveling down the tether from the remote restricted airspace and over imaginary power lines to light a distant city. 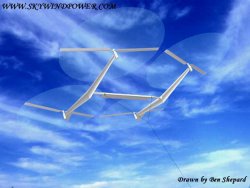